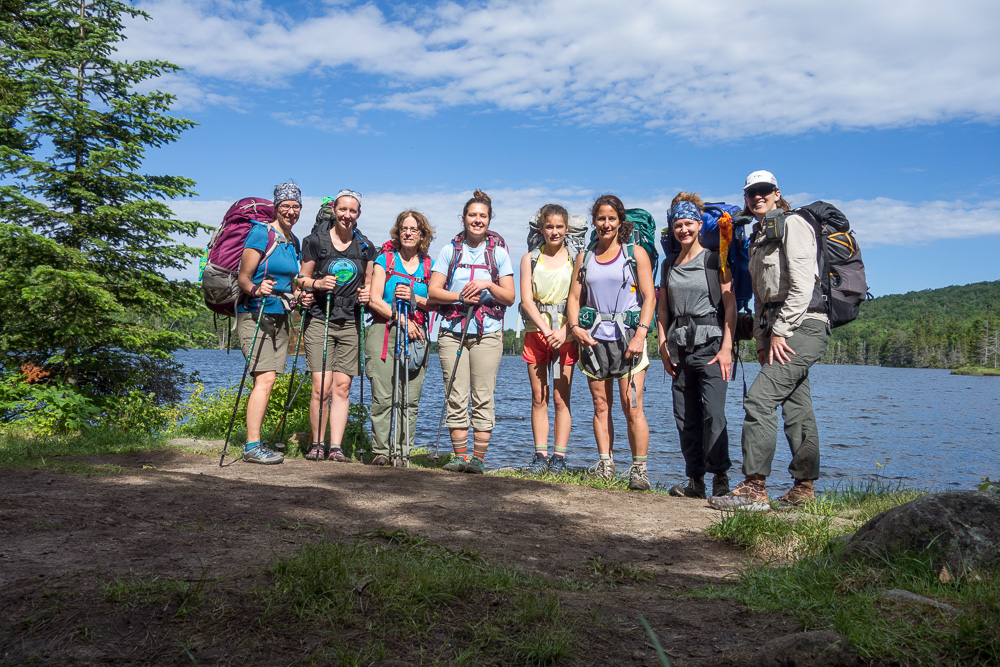 GMC recently held a women’s intro to backpacking workshop, which isn’t to say that backpacking is somehow different for women than it is for men.  Sometimes it’s just easier to learn in a group of other women.  There’s a comfort and inclusivity there that is not always found in mixed gender groups.  But even though the act of backpacking itself is absolutely the same for women and men, women do sometimes have questions about it.  Despite the popularity of Wild, society still generally tells girls that certain things aren’t for them, and moving past preconceived notions can be difficult.

So let’s examine some myths that are commonly believed about women in relation to backpacking.

Myth #1: A man (father, boyfriend, etc) has to teach you how to backpack.

Anyone with knowledge and skills can teach you.  Backpacking with other women forces you to step out of any preformed gender roles.  You can even figure it out by yourself, through trial and error or thanks to the wonders of the internet.  (Doing a little research first is recommended to make the trial and error slightly less painful.)  There are tons of bold women backpackers online to follow and see how it’s done.  Check out Liz “Snorkel” Thomas, Heather “Anish” Anderson, Jennifer “Odyssa” Pharr Davis, and Erin “Wired” Saver. While a man heading off into the wilderness alone is often praised for his bravery, stoicism, and thirst for adventure, a woman heading off into the wilderness solo often gets told she’s crazy, will be assaulted, eaten by bears, or fall off a cliff.  But why would transplanting a woman into nature suddenly make her inept?  In fact, men are more likely to initiate search and rescue calls.  And as far as crime goes?  Your risk of being a victim of a crime in the backcountry is way lower than in the front country.  This goes for both definitions of “alone:” when you are actually hiking without any other people, and when you are simply hiking without a man, e.g. “What are you two girls doing all alone out here?”

It has long been a myth that menstruating women attract bears and that’s just not true.  Back in 1967, two women were killed by grizzlies in Glacier National Park and the park service was quick to leap to conclusions, which snowballed into this baseless “well-known fact.”  While having your period on trail can be annoying (much like in town), it’s not a big deal.  There are many options for dealing with it.

Myth #4: You should look good at all times, which just isn’t possible in the woods.

A: You are not required to look good for others ever.  Do what makes you feel good, whether that’s full hair and makeup every day or showering once a week.  B: You can keep to high hygiene standards and even wear makeup on the trail if you want, or you can embrace the hiker funk and take the opportunity of a trip without mirrors to forget about society’s expectations.  Even if you enjoy spending time on your appearance in town, taking a break from that can be freeing!  In fact, there’s nothing like seeing what your body can accomplish to realize how beautiful it really is. See how fun (and safe and simple and liberating) backpacking can be by getting out there and trying it for yourself!  Check out our schedule of upcoming skills workshops to help you get started.

What other myths have you heard about women and backpacking? Hiking in Vermont is something different and meaningful to us all, and we can't wait to celebrate that reason with you! Join Green Mountain Club's Long Trail Day, a summer-long fundraiser that invites you to be a part of the future maintenance and protection of the trail. To join, commit to raising … END_OF_DOCUMENT_TOKEN_TO_BE_REPLACED