History & Overview of the Appalachian Trail 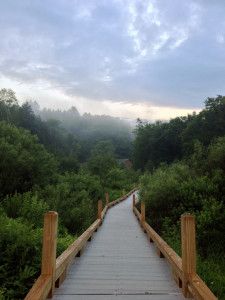 The AT was completed in 1937, 13 years after MacKaye’s first proposal. The trail spans over 2,000 miles through 14 states, connecting Springer Mountain in Georgia with Mount Katahdin in Maine. The Appalachian Trail Conservancy, founded in 1925, works with its member clubs and federal state agencies to preserve and maintain the trail, the world’s longest linear national park.

In Vermont, the AT coincides with the Long Trail beginning at the Massachusetts border, just north of Mount Greylock. The two trails share a footpath for 100 miles through southern Vermont, crossing notable peaks such as Stratton and Bromley.

Killington Mountain in central Vermont marks the first time the AT reaches an elevation of 4,000 feet since Tennessee. For those moving northbound on the AT, it’s been hundreds of miles since mountains of these size were encountered, and Vermont offers a preview to challenges ahead, including the rugged White Mountains of New Hampshire and Maine’s daunting 100-Mile Wilderness.

The two trails split at “Maine Junction” just north of U.S. Rte. 4, with the AT swinging east as the LT continues north. The remaining 50 miles on the AT to the crossing of the Connecticut River are more moderate, providing a break between the Green Mountains and the Whites. 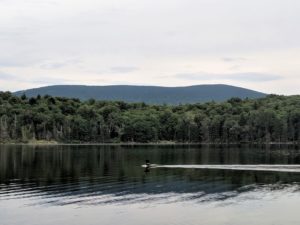 Just like the Long Trail, the Vermont Appalachian Trail has shelters that can be used by hikers. Winturri Shelter, Stony Brook Shelter, Thistle Hill Shelter, and Happy Hill Shelter are all available on a first come, first serve basis for hikers to spend the night.

Group Use:
Groups hiking this portion of the Appalachian Trail may need an Outfitter Guide Special Use Permit from the Green Mountain National Forest. Gilford Woods State Park Campground, where the Appalachian Trail crosses VT 100, and Silver Lake State Park Campground, north of the AT off VT 12 in Barnard, are available for base camp hiking. Please refer to our Groups Hiking Page for more information. Along the Vermont Appalachian Trail starting at Maine Junction, you will see the great work of the Green Mountain Club’s Upper Valley Ottaquechee Section. It is this group of dedicated volunteers that constructed the Stony Brook Bridge and created the Stony Brook Shelter. They spent an entire decade from 1980-1990 relocating the Appalachian Trail between VT 100 and VT 12.

Vermont’s mountains are loved for many different reasons: formative youth experiences, core memories with family, camaraderie and friendships developed on trail, awe and appreciation for nature and its mental and physical benefits. To improve these experiences, GMC relies on the support of members … END_OF_DOCUMENT_TOKEN_TO_BE_REPLACED