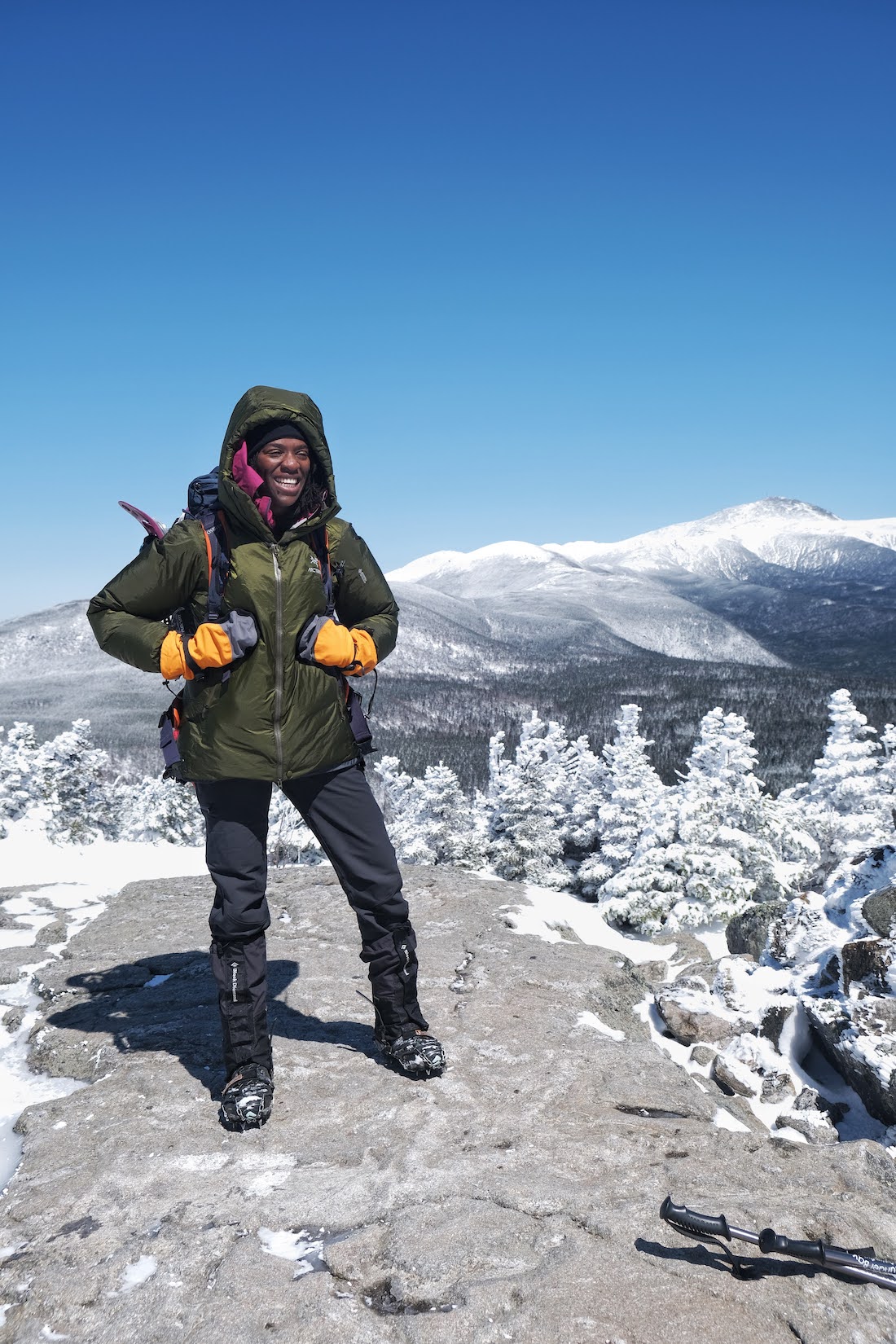 This article previously appeared in the Winter 2022 Long Trail News, under the headline “Decentering Whiteness in Hiking,” and was written by Mardi Fuller. Join Mardi on Wednesday, February 22, on Zoom for an installment of the 2023 Outdoor Adventure Speaker Series: “Race, Identity, and Rime Ice: Hiking the New Hampshire 48 in Winter.”

You’ll find me in our northeastern woods in every season. Ever since sleep away camp hikes in the Catskills and then my first backpacking trip on the Long Trail, in college in 1997, I have loved our particular configuration of forest land, our wide variety of vibrant trees and our rich soil. As I became a regular hiker, the alpine zone drew me in, especially in winter. The drama imprinted itself upon me: rime ice on rocks and brush, the massive drifts at times, and trail signage transformed into icy art installations.

​​As a child and as a young woman I was sensitive to the fact that I was one of few, if any, Black people that I saw on the trail. In Vermont, 90% of the population identifies as white, and the folks who utilize the Long Trail largely reflect that number.

The low-level discomfort I felt in a perceived white space was not terribly different from my experience in school or in the workplace, with one notable exception: I went to the woods in my free time. Time when I could’ve chosen the relief and the peace found in Black or BIPOC community. And yet, I wanted to be outside — I love to be in nature because I am nature, because the living earth infuses me with wellness and healing, with inspiration.

It can be weird outdoors, for People of Color. We love nature as much as White people, the dominant group, but we’ve faced barriers, both conceptual and practical, that impede our full access to it. Indigenous people are the original leaders on this land, be it in adventure, preservation, or agricultural innovation. Black, Asian, Latine and multiracial people have connected and contributed to the land for as long as we have been here. But our contributions have gone unrecognized or erased, and our experience on the land is fraught with the memory of our oppression.

Peeling back all of the layers of why and how we’ve gotten to where we are requires more than just a history lesson. It requires an analysis of how social forces engender patterns and habits that become entrenched. It requires connecting our identities to our environmental heritages. And for White people it requires understanding the history of racialization, listening to lived experiences of people of color, and integrating that knowledge into their ways of being.

But Why Do You Hike?

What follows is a composite of multiple conversations over the years. A White hiker asks me,

I struggle to determine how to approach this question, where to even begin. Some would find the question intrusive. I don’t. I know that the intent is genuine curiosity. But I’m saddened by the ignorance of it. The answers are complex, but they are easily discoverable.

I respond by flipping the question.

Well, hmm. Why do you hike?

The hiker may answer: “Because I love nature! I love being outside, I love physical exertion. Because I’ve been going since I was a kid. Some friends invited me as an adult. I went on a school, group or church outing. I was an Eagle Scout.”

These responses highlight a focus on individualism and a deep and likely unrecognized sense of belonging in those spaces. A belonging felt so deeply that some might experience it as an entitlement, as a sense of ownership. Additionally, it is a hallmark of both white cultural conditioning and our nation’s value system to over-emphasize individuality and individual choice, even in the face of ready evidence of how our environments, our families, our communities and our shared history impact our realities.

In this conversation, some hikers would even stop at, “I love being outside” – had they never thought more deeply to examine exactly how they had developed that love? They had received opportunities over the course of their lives to have varied experiences outside, never being questioned for their interest, rather receiving affirmation that what they had just done was strong, brave, cool.

At this point in our discussion, a humble and open conversation partner sees the direction I am headed in, and I can share some of the ways that People of Color have been historically excluded from access to outdoor sports and even simply to nature spaces. I do my best to explain some of the history and the national ideologies centuries in the making that shape policies and outcomes. I draw on the scholarship of Carolyn Finney in her seminal book, Black Faces, White Spaces: Reimagining the Relationship of African Americans in the Outdoors.

The Forces at Play The environmental ideology that we operate out of today has its foundations in our country’s origin story: the colonists’ forced removal of Native Nations from their lands and the enslavement of African people. Throughout the long process of its founding, the U.S. attempted to erase the history of the land it now occupies in order to build upon it a new identity which did not include Black, Indigenous and people of color in its narrative. We were actively pushed to the margins. The legacy of these original sins, and all the oppression that followed, looms large in our policies, social dynamics, and existence today.

The federal government moved Native people off of lands to create national parks, designated for the “enjoyment of all men,” which implicitly meant White people. Concurrently, the same federal government put laws into place to limit movement across the land and accessibility to the land for Black people, Chinese people and Native people. The Homestead Act of 1862 gave 160 acres of free land to White men even while the pending legislation to give former slaves 40 acres and a mule was rescinded by the government to appease former southern slaveholders.

The narratives shaped during this period were key to enshrining the symbols and iconography meant to inspire White men to expand into the land, and to exclude the rich history People of Color have with the land.

And of course, all of this precedes the concrete atrocities and injustices that we talk about more frequently in the conversation about equitable access to the outdoors.

Black people were forced to work the land during the eras of slavery and sharecropping, creating an emotionally fraught relationship to the natural world. The risk of violence or false accusations at the hands of White people loomed in the woods. In the 20th century, sectors of society including banking, real estate, and even churches enacted residential segregation by race, systematically pushing Black people into concentrated urban areas that were then deprived of green space and other resources. Segregation banned us from many parks, pools and beaches. Today, discrimination, profiling and violence are regular threats, so much so that we have hashtags like: #DrivingWhileBlack, #RunningWhileBlack, #BirdingWhileBlack.

Socioeconomic inequities leave us collectively with less time and money to invest in recreation. We are “welcome” in most parks and on most trails, but we didn’t co-create these outdoor recreation venues. We aren’t free to fully be ourselves and bring our unique talents and perspectives to the enterprise, and to the detriment of the institution, we don’t share ownership of outcomes and thus we may not feel responsible for caring for and protecting that space. Making change will rectify past wrongdoing and enrich outdoor experiences for all of us. It involves healing from the toxicity of past and current dynamics, and it’s happening. Affinity groups provide BIPOC the critical time and space to recover from everyday racism and hyper-awareness around our race. They provide an environment with the conditions necessary for us to self-determine rather than taking direction from the existing structure. This allows us to develop unique leadership models which we then offer to the greater community.

What can White hikers and others occupying dominant social locations do? First, and most importantly, step back, listen and follow. Marginalized groups who have been living under cultural dominance need some time to exercise our agency, to develop our terms of engagement and our cultural expressions within the landscape of outdoor institutions and activities. White hikers can support initiatives financially, and provide technical help when asked. During this time of rebalancing, drawing People of Color, queer people, people with disabilities, neurodiverse people and more into the halls of leadership, White people can learn and grow, focusing on racial identity development in order to better understand and interpret the forces at play.

Decentering whiteness in the hiking community is critical to opening up access for all. This includes recognizing racism and white supremacy in our ways of thinking and operating and working to root them out. It means naming white cultural norms and making space for all groups of people. It doesn’t mean these practices are necessarily bad or good, but that they shouldn’t be the sole occupant of the center. This will be a collective process throughout societal intersections including individual, interpersonal and institutional levels. When true leadership is established across groups who have been marginalized by white supremacy and heteropatriarchy, we’ll see an increase in BIPOC folks, queer folks, people with disabilities, people of all ages, all sizes participating in ecological protection, recreating on their own terms, improving their health outcomes and finding their own joy.

Mardi Fuller is an outdoor industry leader who advocates for racial equity through writing, speaking and community building. A lifelong backcountry adventurer, in January 2021 she became the first Black person to hike all 48 of New Hampshire’s high peaks in winter. She lives in Boston where she works as a nonprofit communications director and volunteers with the local Outdoor Afro network. Follow her journey at @wherelocsflyfree.

Vermont’s mountains are loved for many different reasons: formative youth experiences, core memories with family, camaraderie and friendships developed on trail, awe and appreciation for nature and its mental and physical benefits. To improve these experiences, GMC relies on the support of members … END_OF_DOCUMENT_TOKEN_TO_BE_REPLACED