At the Green Mountain Club’s 112th Annual Meeting on Saturday, June 11, 2022, three general seats will open on the board of directors. General directors serve with directors elected by the sections. Directors are elected to three-year terms, with a limit of six consecutive years of board service. Read about this year’s candidates, and vote using the form below. Don Taylor has been active in the outdoors for his entire life, but didn’t fall in love with hiking until discovering the Green Mountains.  He has completed section hikes of the Long Trail and the Appalachian Trail, as well as the Metacomet-Monadnock and Massanutten Trails.  He is currently working on a side-to-side hike on trails maintained by the GMC, having completed 77 of them.  He hopes to complete this quest in 2022.

Don holds a PhD in Industrial Engineering and Operations Research from the University of Massachusetts and has held a number of leadership positions in academia.  He is currently the Executive Vice Provost at Virginia Tech.  His previous experience in non-profit organizations includes service as President of the Institute of Industrial and Systems Engineers (IISE).  He is currently Chair of the Board of IISE Solutions, a wholly owned subsidiary of IISE.

Don is a life member of the Green Mountain Club and currently serves on the Development Committee.  As a member of the Board of Directors, he hopes to increase his participation in the life of the club to protect and maintain the Long Trail, and to provide educational and recreational opportunities for future generations. 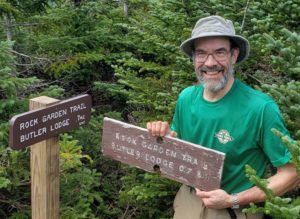 David Hathaway grew up in the Midwest and first came to New England in 1974 to attend Dartmouth College. His first taste of New England hiking came the day after he arrived with a three-day, 52-mile hike on the AT from Hanover, New Hampshire to Moosilauke Ravine Lodge. After two years of grad school in California, David moved to Vermont in 1981 to work for IBM.

He began hiking in earnest in 1990 after moving to Underhill, where he and his wife, Carolyn Greene, still live (a 5-minute drive, or long bushwhack, from Underhill State Park). David joined GMC in 1996 while planning his first Long Trail end-to-end hike, which was intended as a thru hike, but completed in sections between 1996 and 1999. He was recruited to lead Burlington section outings in the early 2000s by then outings chair Rich Larsen, and has led at least one trip every quarter since then, and at least one a month since 2015 when not prevented by recent pandemic restrictions. David did his second Long Trail End-to-End hike in 2010, again planned as a thru hike, but completed in sections between June and December.

Upon retiring from IBM in 2014, David became outings chair and webmaster for the Burlington section. He is also a volunteer trail adopter (of Rock Garden Trail on Mt. Mansfield), a corridor monitor, and enjoys getting out with a chainsaw to help clear blowdowns on the trails. He has taught the GMC map and compass navigation class several times. In 2021 he became chair of the GMC Trail Management Committee. David is an Adirondack 46er, and has climbed the AMC New England Hundred Highest Peaks and 19 of the Colorado 14ers. Nika Meyers is an artist, educator and thru-hiker who grew up in the hills of Bridgewater, Vermont among fresh produce and hardwoods. After graduating college in 2011 with a degree in Studio Art and Environmental Studies, Nika joined GMC as the VHCB AmeriCorps Group Outreach Coordinator, advising groups on responsible trail use and coordinating service trips and stayed on with GMC as a caretaker and trail crew member through 2015. She fell in love with hiking and the community surrounding the trail.

Inspired by curiosity, she has spent the past decade working with the GMC, teaching the wonders of the North Cascades in Washington, following migratory birds to Costa Rica, making art, and hiking over 10,000+ miles across the United States connecting communities, landscapes and ecosystems.

Nika thru-hiked the Long Trail in 2012, her first true backpacking experience. It kicked off a deep love of long-distance hiking and trail running; today, Nika is a Triple Crowner (having hiked the Pacific Crest Trail, Continental Divide Trail, and Appalachian Trails). To reconnect with the Long Trail in a different way, in October 2019 Nika set the first women’s unsupported fastest known time hiking the Long Trail in six days, 11 hours, and 40 minutes. (The record today is held by fellow Vermonter Mikaela Osler, who broke Nika’s time by a mere 7 minutes in 2021.) In 2021 to connect deeper with the Colorado landscape, she set a new self-supported female FKT record on the 500 mile Colorado Trail in 9 days, 14hours, and 13 minutes.

Nika has been creating a life in Aspen, Colorado for the past 4 years where she is a Nordic ski coach, artist, and naturalist. She is thrilled to continue to be involved with the Green Mountain Club Community!

Voting for the 2022 General Directors Election has closed. Tune in to Annual Meeting on June 11, 2022 to welcome our new directors.

Even though it may not feel it, it is that time of year: winter hiking is here! Early season conditions still exist, so there are a few things to keep in mind when heading out on the trail this time of year. Are you ready for hiking in the cold and snow? Although a very beautiful time of year … END_OF_DOCUMENT_TOKEN_TO_BE_REPLACED